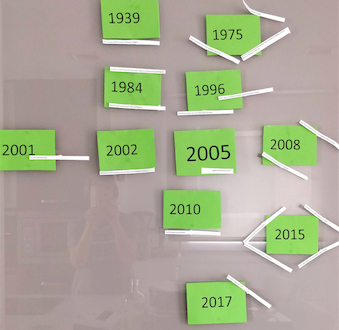 Today, I’m sharing the answers to the quiz I posted about Key Dates in the History of B2 First.

I’m going to share them via some photos.  At the seminar in San Sebastian yesterday, I gave each participant a fact and asked them to stick their fact next to the right year. 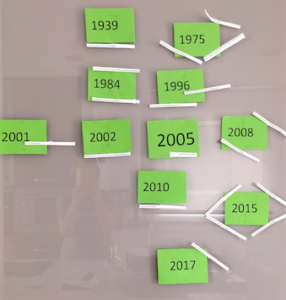 Above are the answers matched correctly and below, some comments relating to the effects these changes have had on the current format of the B2 First exam. 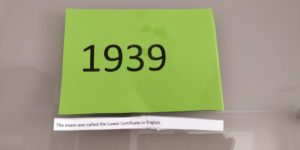 Over the years, other exams were added to the ‘Suite’ of exams.  There is now a wide range of exams, at each of the levels of the Common European Framework. 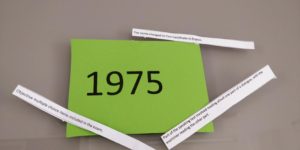 1  The name changed to First Certificate in English.  This is how many people call it today.

2  A big ‘step forward’ to the speaking test becoming more ‘communicative’ was the introduction of a dialogue, which was read aloud by the candidate and the examiner.

3   Objective multiple choice questions were used for the first time.  We still have these for some of the Use of English, Reading and Listening tasks.

The next year is significant for me – it’s the year I came to Spain to teach! 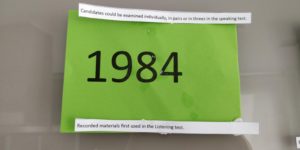 In 1984, there were two changes which have carried forward to this day:

1  Recorded material was used for the Listening Test.  This continues to be the same today.

2  There was a move from examining candidates individually to Speaking Tests in pairs (or groups of 3).  At the start, it was still possible to continue with the individual format, but this was then eliminated in 2002 as an option and is now only available in the case of a candidate who has special requirements, which have to be approved well in advance by Cambridge Assessment English. 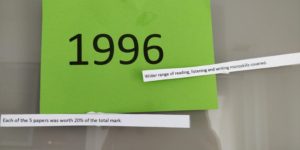 96, the current allocation of marks was introduced – with each of the 4 skills, plus Use of English, being worth 20%of the total mark & result.  That same year, a wider range of microskills for reading, writing and listening began to be tested.

Next stop, 2001.  This, the European Year of Languages, saw the launch of the Common European Framework, which has had such an impact on teaching, learning and testing. 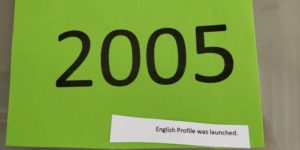 The CEFR was deliberately plurlingual.  In 2005, I was at the public launch of the English Profile Project at IATEFL.  This is a fantastic resource which I draw on a lot in my teaching, training and writing.

In 2008, there were several changes to the format of the exam.  In the Writing test, a compulsory Part 1 was introduced. At that point, it was a letter or an email.  And the overall timing of the exam was reduced to 4 hours. 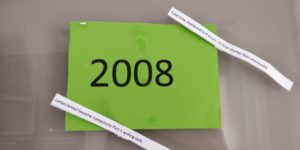 In many countries (and certainly where I teach, in Spain), candidates taking B2 First were getting younger and younger.  Yet there were still adult candidates taking it too.  Following on from the school versions of Key and Preliminary, from 2010, there have been two versions of the B2 First exam available:  First and First for Schools.

Still very much in my mind are the changes that were introduced in 2015.

Reading and Use of English were combined into 1 paper. 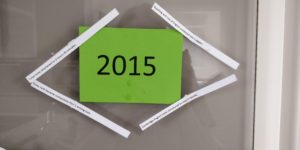 This, along with other changes, meant that the overall timing was shortened to 3 hours 29 minutes.  It does mean that candidates have to be quick in order to finish Paper 1.

Writing an essay replaced the letter/email task as the compulsory Part 1 writing task.

And results for the exam, along with C1 Advanced and C2 Proficiency, were reported according to the Cambridge English Scale.

And the most recent change has been with the name.  Cambridge Assessment English provide B2 First and/or B2 First for Schools exams.

No doubt there will be more changes in the future, as Cambridge Assessment English aims to provide assessment that reflects the world of English language teaching and tests real English.  Watch that space!