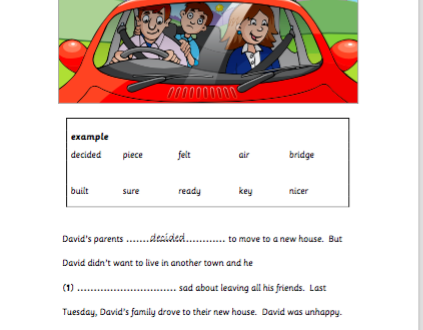 In this post, I’ll be sharing some insights and tips to help your students with A2 Flyers  Reading and Writing Part 3. 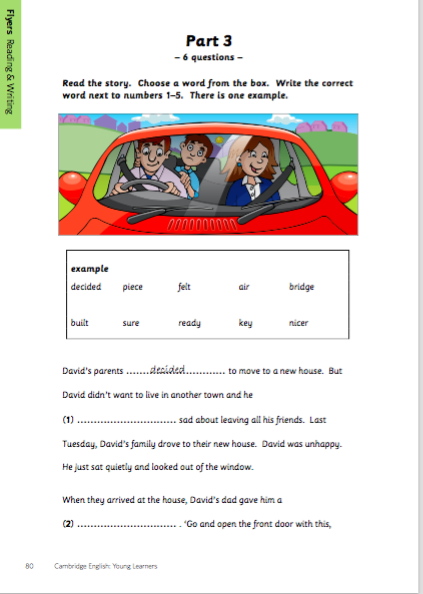 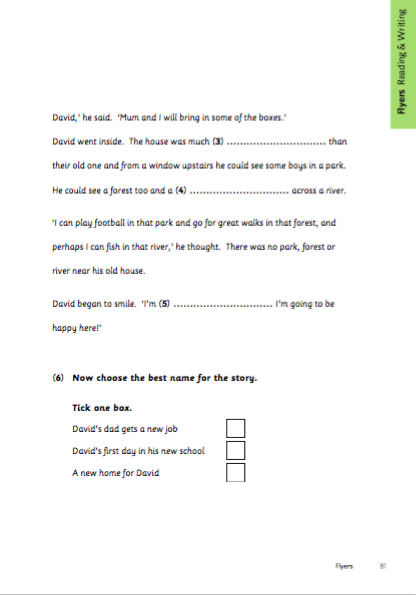 What tips can we give students for this part of the Test?

2.  Read through the start of the text. Think about who the story is about.  The person may well be in the picture above the text and there may be other people in the story too. 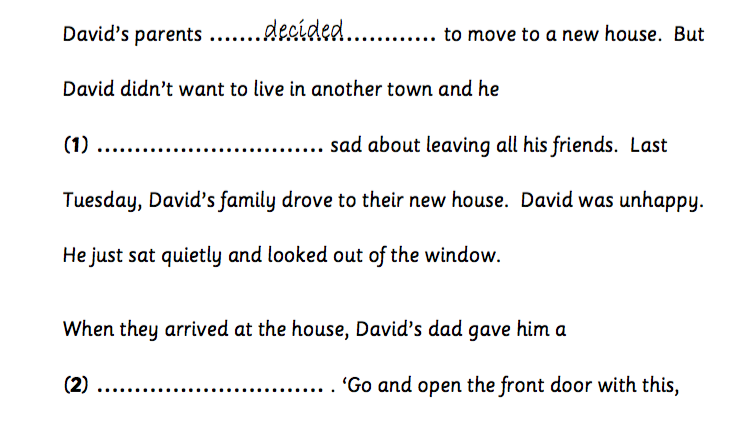 In this example, the story is about David and his parents.  The picture shows them in their car, driving to their new house in another town, and David is looking out of the window and feeling unhappy.

3.  Read through the whole text – don’t start to fill in any gaps and forget about the words in the box for the time being. (The reason why they were moved to above the text is that some candidates forgot to use them and wrote their own words in the gaps!) 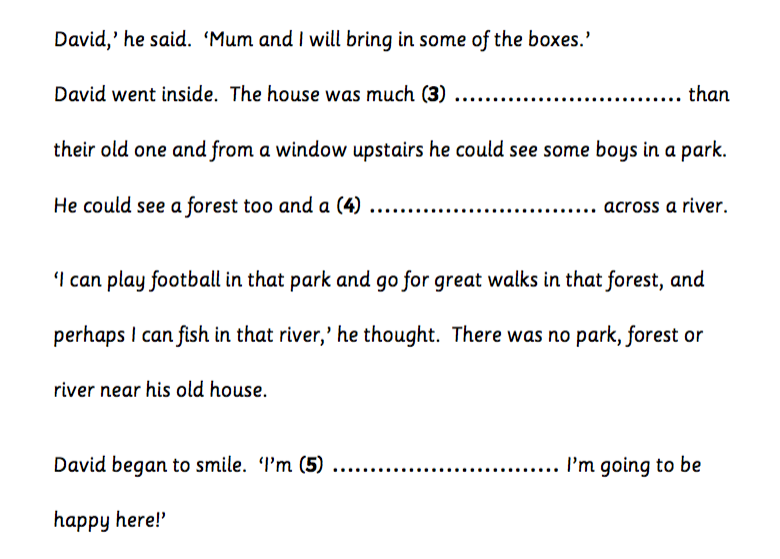 Notice what tenses the verbs in the story are in (the main part will probably be in the past simple, but where there is direct speech, there will probably be some present simple verbs and other tenses.)

In this story, the verbs are mainly in the past simple, but in the direct speech, we have the imperative (Go and open the front door with this,) the present simple  (I can play football in that park ….), the future simple (Mum and I will bring in some of the boxes.) and going to (I’m going to be happy here!)

What kinds of words are they? Take time to think about this.

In this example, we have three nouns – all singular piece, bridge, key (often there are plural nouns too), three verbs, all in the past simple (or perhaps a past participle) decided, felt, built, three adjectives sure, ready– one in the comparative form nicer. This spread of word classes is typical of the Flyers.  Sometimes, they will get adverbs too.

5.  Cross out the example word. You will not use this word.

6.  Read the text again and think about what kind of word is missing from the first gap. Remember to read the words before AND after the gap (and that you might need to read the previous and the next sentence too).

David didn’t want to live in another town and he (1) ……. sad about leaving all his friends.

The gap comes after the pronoun he so it’s very likely to be a verb.  In this case, felt is the correct word.

Do the same with the other gaps.

The word ‘a’ before the gap tells us that we need a singular noun, and the next sentence tells us what the thing does (It opens doors.). So, the answer is key.

There are two important clues here.  The verb was will need an adjective to follow and the word than tells us that it is a comparative.  nicer

Like (2), we read the word a before the gap, telling us it’s a noun.  A bridge goes across a river, so the answer is bridge.

Again, the verb ‘m (am) tells us that we need an adjective. We have ready and sure to choose from.  The correct answer is sure.

7.   As you use words from the box, cross them out. You will not use any word twice.

Leave any gaps that you find difficult till the end.  That way, you have fewer words left to choose from.

8. Check your spelling! Spelling mistakes will lose you marks!

fell instead of felt   (confusing words that look and sound similar)

brigde instead of bridge (two consonants together can be confusing.

bilt instead of built (the letter u is silent here)

shure instead of sure because of the pronunciation of the initial ‘s’.

nice instead of nicer

9. Read the whole text again and check that it makes sense and you have written a word in every gap.