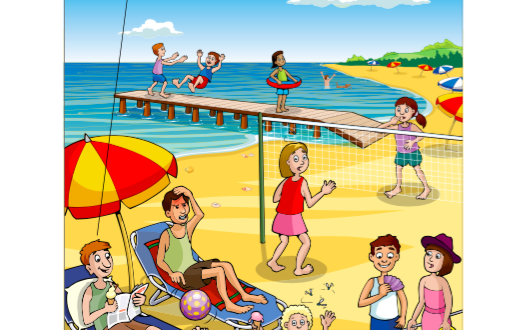 In my previous post, I discussed A2 Flyers Listening Part 1. The picture, the names.

In this post, I will share some tips for students to help them do well in this part of the A2 Flyers Listening Test. 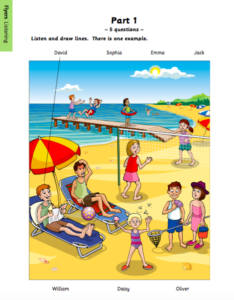 One important difference at A2 Flyers is that numbers will not be used between each part of the conversation.  However, the pauses between each part will clearly indicate when the speakers have finished speaking about one person in the picture and are going to move on to talk about another person.

The names will come from one person – the man/woman/girl/boy that knows the people.  But information to identify each person may well come from both of the speakers.

There will be two things that will identify each person.  For example, Emma is playing volleyball and she’s wearing a pink skirt.  Jack has a shell and he has a big smile on his face.

One very important to tell your students!  One name is extra and will not be used! In this example, the name Sophia is not used so it should not have a line drawn from it.    Every year, I see candidates drawing a line from the extra name to someone in the picture because they think they have to use all the names.  If they draw a line from this name, they will lose a mark!

And with ten people in the picture, four people will not have a line drawn to them.  They will probably all be distractors for another person in the picture.  In this example, the boy falling into the water is a distractor for the boy pushing him (Oliver).  The girl standing on that wooden bridge is wearing blue shorts, and so is the boy with the shell, so they are also distractors for Oliver.  The girl in the striped swimsuit is a distractor for Daisy, because they are both trying to get the flies to do away.

To work on this distraction, have fun in class.  Ask students to find one thing in common between all the people in the picture!

David’s sitting under an umbrella and so is William.

David’s eating/holding an  ice cream and so is the girl in the swimsuit.

David’s wearing a green T-shirt and so is William and the girl standing on the bridge.

David has light brown hair and so have Oliver and Jack.

David’s mouth is open and so are Daisy’s and Emma’s mouths.

Wow!  Made it!  Quite a challenge to do that!

And finally, as with all the parts of the A2 Flyers Listening, reassure your students.  They will hear the information twice, so if they don’t understand everything the first time, they can complete and check their answers the second time they listen.  Don’t panic!  And don’t leave anything unanswered!