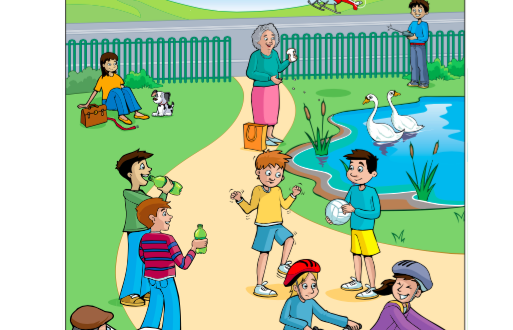 In this post, we’ll look at what students have to listen to and do in A2 Flyers Listening Part 1. 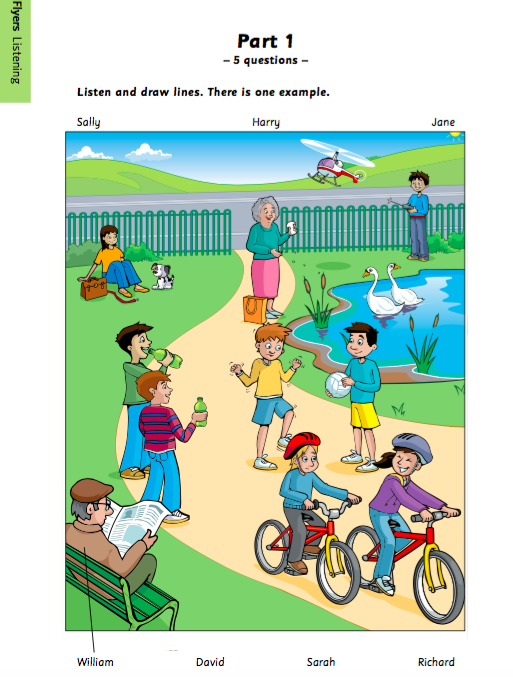 As you can see, there are 10 people in the picture at Flyers.

There are 6 names outside the picture (above and below). *Most of the names will be new at Flyers, but a couple may come from the Movers wordlist (or even Starters).

Some are boys’/men’s names, the others are girls’/women’s names.  (*In this example, none of the names can be for both.  Some names on the Starters wordlist can be for both:  Alex, Kim, Pat, Sam).

The man is sitting.  A woman is also sitting.

Two boys have bottles in their hands.

Two girls are wearing helmets and are on bikes.

Two people have bags next to them on the ground.

There are two helicopters, two swans, two plants in the water.

Now, let’s look at the Tapescript for this Part. 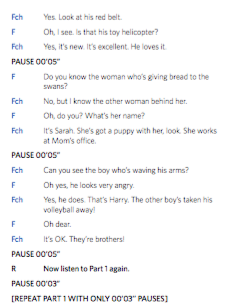 You can see that for each question, there are between 4 and 6 ‘turns’.

Between each part of the conversation (and each question), there is a 5 second pause (3 seconds the second time students hear it).

Note:  Unlike Starters and Movers Listening Part 1, students do not hear numbers for each question.

We usually get two pieces of information about each person to help us identify them:

William is reading the newspaper and he’s wearing a nice hat.

Richard has a striped sweater and he’s drinking lemonade.

Sally is on a bike and has short blonde hair

David has a red belt and has a toy helicopter.

Sarah has got a puppy and she’s behind the woman who’s giving bread to the swans.

Harry is waving his arms and looks very angry.

Note:  We also hear some information about each person that doesn’t identify them physically.

Sally is the girl’s best friend.

David is the girl’s cousin.

Sarah works in the same office as the girl’s mom.

Harry’s brother is the other boy who’s next to him.

In the next post, I’ll share some tips for doing well in Part 1 of the A2 Flyers Listening.