In this, my ninth post on the Flyers writing skills booklet, we’ll be looking at punctuation in writing.

I often say at seminars that I feel that punctuation is a much-neglected skill.  Many course books never mention it, and others have a brief slot in one or two places, nothing more.  Even at higher levels (C levels), over-use or under-use or mis-use of punctuation is one of the most common mistakes in students’ writing.

So, let’s try and train our learners while they are young!

This page in the A2 Flyers Writing Skills booklet actually assumes that by A2 Flyers, learners will know all the punctuation marks and when they are used – which may well not be the case!

In Spanish, for example, the use question marks both at the beginning and at the end of questions:  ¿Cómo te llamas? It’s the same with exclamations ¡Muy bien!  So, even though punctuation marks do exist in our learners’ L1, we can’t assume that they will just pick up their correct use in English.

Let’s look again at the story about Jim and his uncle Tom from page 7 B.

Later that day, Jim and his uncle sat down on the side of the river.  Uncle Tom put his heavy rucksack on the ground.  “Let’s take off our shoes and put them in the river!”, said uncle Tom.  ” This water is really cold!”, said Jim.  “Yes, it is! said uncle Tom.  Uncle Tom drank some hot tea.  It was sunny and very warm.  “That waterfall is so beautiful, isn’t it?”, said Jim.

I’ve added some direct speech to the story.  It makes it more interesting I feel.  And, it gives us some more punctuation to analyse!

Ask learners to find these punctuation marks in the story and to say why they are used: 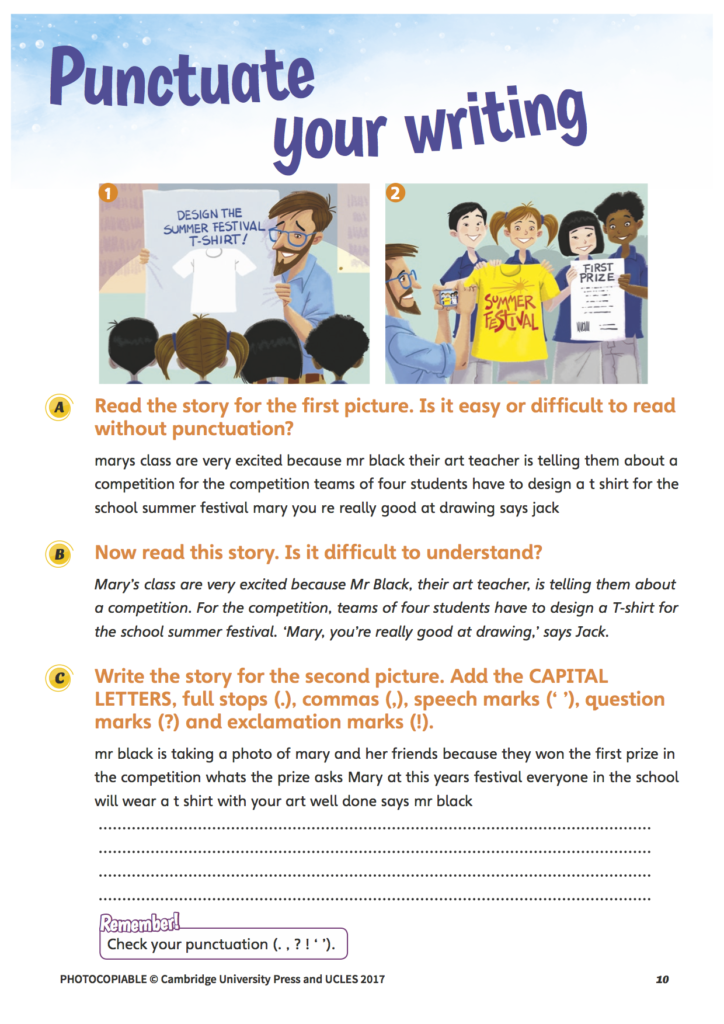 I’d go straight to the first text in A, without looking at the pictures first, as I’d normally suggest.

The text is very difficult to read because there are no full stops, commas, capital letters.

Ask them to read the same text, but this time, with punctuation (B).

Learners should say that it is much easier to understand the story now.

At this point, I’d ask them to look at picture 1 and to answer questions about it to check their understanding of the story.

(Pointing to the man) Who’s this? (Mr Black) What does he teach? (art)

(Pointing to the poster) What’s the poster about? (a competition) What do the students have to do? (design a T-shirt) Who’s good at drawing? (Mary)

Next, point to picture 2 and ask questions:

Learners then write out the text in C for the second picture.