Today, I’m writing about linking ideas together in writing.  Page 9 from the Flyers Writing Skills booklet. 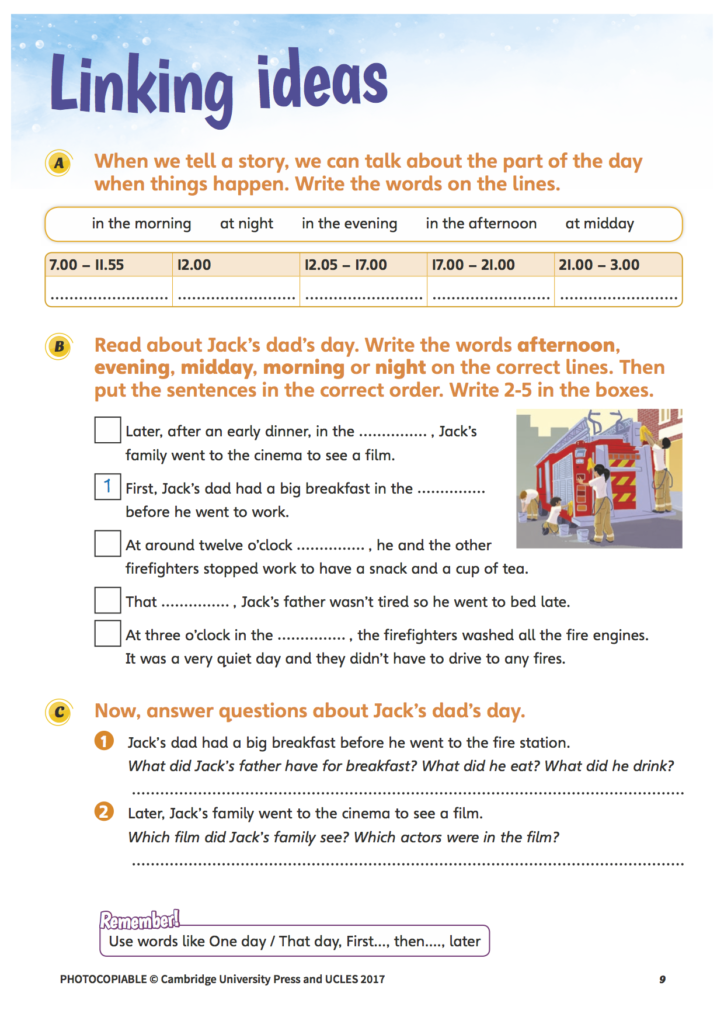 This page looks at time sequencing.

We start by asking learners to write the time expressions on the line under the correct times.

This is important in some parts of the world (like Spain, where I’m based) because the start/finish times are not always the same.  In Spain ‘tarde’ is used for both afternoon AND evening.

Check answers and ask learners to look at the expressions and tell you the ‘rules’ and the exceptions.

in the + part of day except for night  (at night)

Next, in B, learners read about Jack’s dad’s day.

Before they read, I’d suggest that you ask learners to look at the picture. 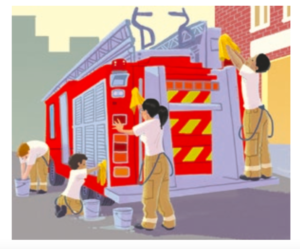 Ask learners questions, like: Tell me words for things you can see in the picture?  (e.g. fire engine, fire fighters, cleaning, washing) Who are these fire fighters?

Then, show them the first sentence from the instructions:

Read about Jack’s dad’s day.  and ask them to say which person in the picture might be Jack’s dad.

Then, read the example sentence with learners.

Ask them which of the words (afternoon, evening, midday, morning or night) is best for this sentence.  (morning) Learners write morning on the line in this sentence, and cross out the word morning in the instructions.

Learners read the other sentences and write the best word in each sentence.

Then, they write the numbers 2-5 in the boxes before the sentences.

2   At around twelve o’clock midday,

3   At three o’clock in the afternoon,

4   Later, after an early dinner, in the evening,

Ask learners which sentences describe the picture (the sentences in 3).

Next, in C, we ask learners to use their imagination, something we’ve been training them to do on the previous pages, as I’ve mentioned in my previous posts, here and here.

After learners have written their answers to these questions, ask them to talk to each other and to compare their ideas.  e.g.  a big breakfast could include eggs, sausages, tomatoes, beans, orange juice and tea. or pancakes with strawberry sauce and toast and coffee.

You can ask learners other questions to continue this: e.g.  What other things did the fire officers do on this quiet day?  Did Jack’s dad go to bed before midnight?  What time did he go to bed?  What time does he go to bed after a busy day?

Next, learners could ask someone about a day when their day was different and write sentences about it.

Or, they can write about a different day that they had – a holiday/special day/a day trip.