Let’s look at page 7 of the Flyers Writing Skills Booklet – Complete a story. 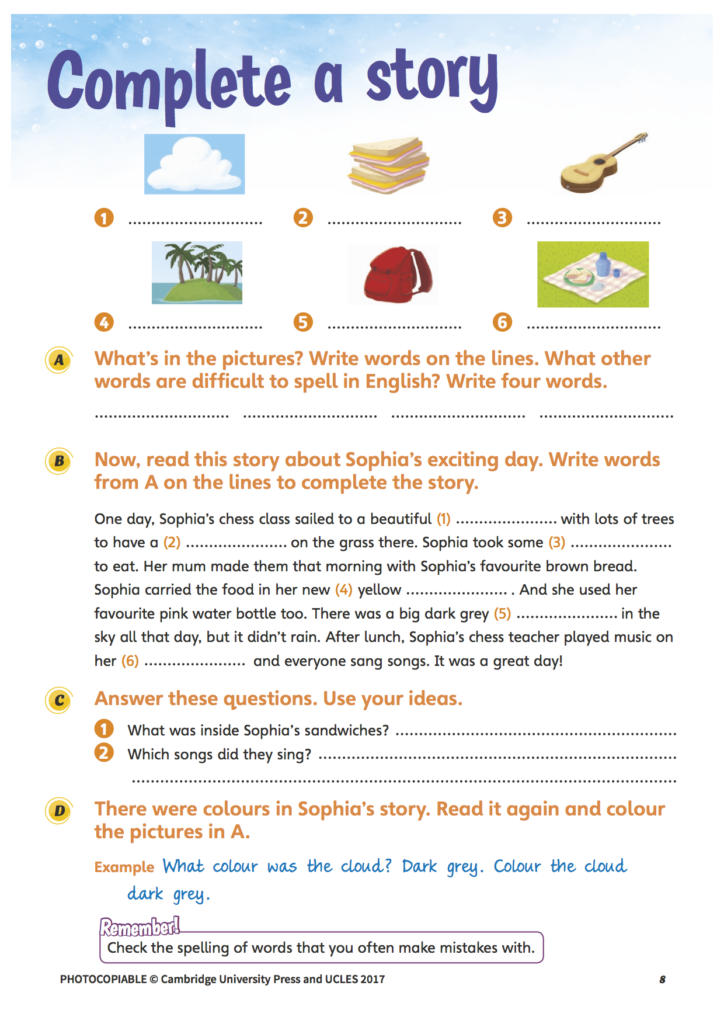 This page focuses on a few things.  In the pictures at the top of the page, we have six pictures.  All the words for the pictures are often misspelled by students.  This could be for various reasons – guitar, for example, has a silent ‘u’, as does island with its silent ‘s’.  Sandwiches has two consonant clusters, something which often causes problems.  And rucksack or backpack both contain ‘ck’, a notoriously difficult combination of letters.

I’d suggest that any words with double consonants or vowels can cause problems (I’ve taken these examples from the A2 Flyers wordlist):

other words with ‘k’:

other words with consonant clusters:

In B, learners use the words they wrote under the six pictures to complete the story about Sophia’s exciting day.

In C, learners are asked to use their imagination and logic.  This is something I’ve talked about in previous posts, like Making sentences longer and Focus on a picture.

What was inside Sophia’s sandwiches?  (Words from the wordlist :  chicken, cheese, onion, tomatoes, salad)

Which songs did they sing?  (Any suggestions from your learners are valid here!)

And in D, learners the story again and colour the pictures in A.  (The problem is, apart from the cloud, they ARE coloured already!)  Learners could colour the bread in the sandwiches brown and write a note that the rucksack should be yellow.  Oh – and they can draw a pink water bottle too!