Today, I’m going to share some activities for taking a gap fill text from Part 5 Key/Key for Schools and using it for further skills and language work.

I shared these activities in my second seminar yesterday in Oviedo.  We were talking about preparing grammar for Cambridge English: Key for Schools, using a cross-skills approach.

I took the Part 5 text about the Cirque du Soleil from the Cambridge English: Key for Schools Handbook.  You can download it here. 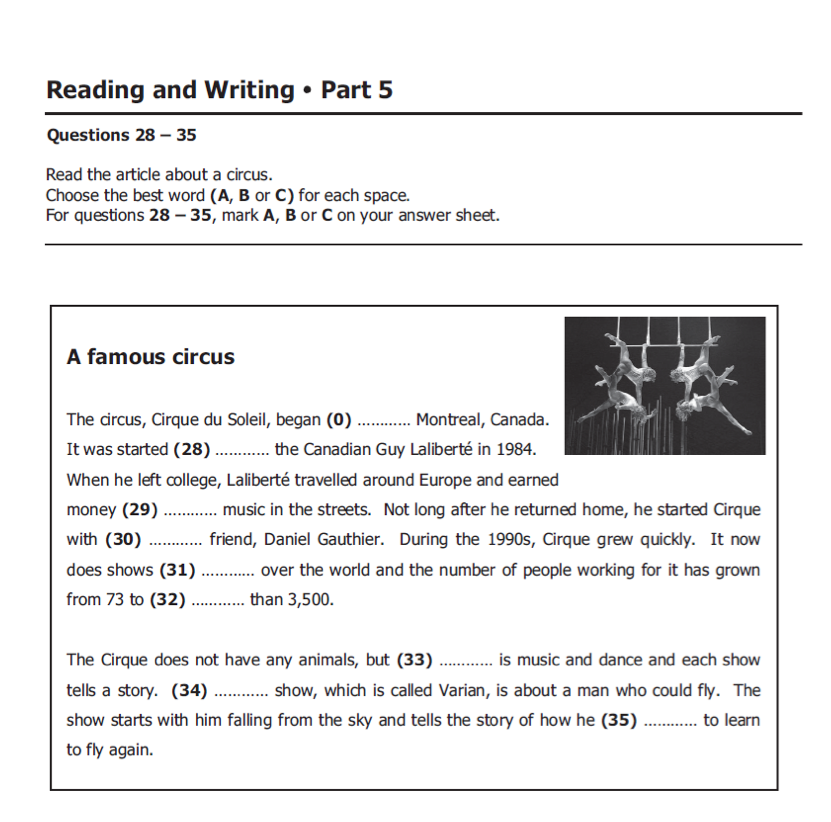 For each gap, there are three options to choose from. 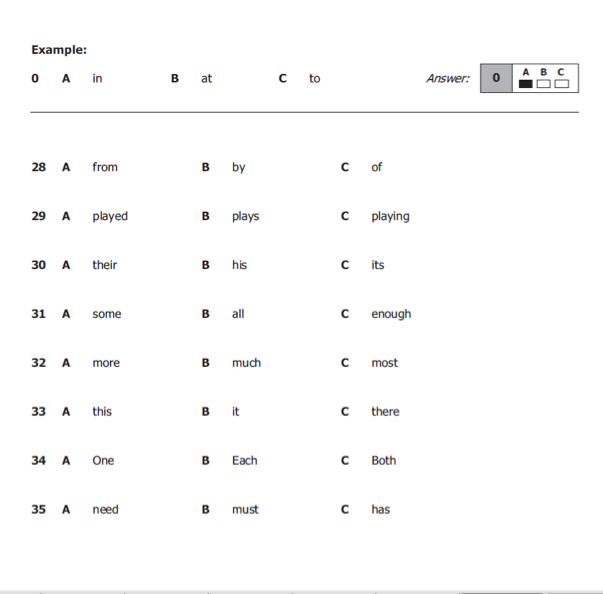 In the Key and Key for Schools exams, this multiple choice gap fill task focuses on grammar.

Types of words tested, as clearly shown in this example, are:

pronouns (personal and in this example, impersonal) – 33

Now, let’s think about how we can use this text in other ways.

I’m a firm believer in training students to notice things about a text, so I try and find something to share with them on every text.

Can you see the difference?

The main verbs in the first paragraph are mostly in the past simple, whereas the verbs in the second paragraph are in the present simple.    Noticing the tenses in the text can help students understand the content and order of events and also help them with the task of putting the words back into the gaps.

Now, let’s look at more things we could use this text for.

First, I would ask students to write numbers on the left, at the start of each line.

3     When he left college, Laliberté travelled around Europe and earned

4     money playing music in the streets.  Not long after he returned home, he started Cirque

8     The Cirque du Soleil does not have any animals, but there is music and dance and each show

This allows us to work with the text and locate words and identify their position so that everyone in the class is looking at the same place.

Say words that are in the text.  They find them as quickly as possible and say which line (and in which place on the line) they are on

What are all the words?  (irregular past verb forms)

Where could you insert:

a.   slowly     (Laliberté travelled slowly around Europe/ and slowly earned money/ who could fly slowly.)

And finally, I reduced the original text to

a base text,  removing chunks of language:

Cirque du Soleil began.  It was started by Guy Laliberté.  Laliberté travelled and earned money playing music.  He started Cirque with his friend, David Gauthier.  Cirque grew quickly.  It now does shows and the number of people working has grown.

The Cirque du Soleil does not have any animals, but there is music and dance.  One show is about a man.   The show starts with him falling and tells the story of how he has to learn to fly again.

I then supplied the chunks as options:

Can you insert these words and phrases?

Cirque du Soleil began in 1984.  It was started by Guy Laliberté in Montreal, Canada.  Laliberté travelled and earned money playing music from the sky.  During the 1990s, he started Cirque with his friend, the Canadian David Gauthier who could fly.  Not long after he returned home, Cirque grew quickly.  It now does shows around Europe and the number of people working has grown from 73 to more than 3,500 and each show tells a story.

The Cirque du Soleil does not have any animals, but there is music, which is called Varian, and dance.  One show is about a man.   The show starts with him falling and tells the story of how he has to learn to fly again.

I’ve added a downloadable document to this post so you can print it off and use it with your students.

Hope you use it!