In this, my fifth post on the Flyers writing booklet, I’ll be looking at writing (and speaking) about differences.

This is from page 5 of the booklet. 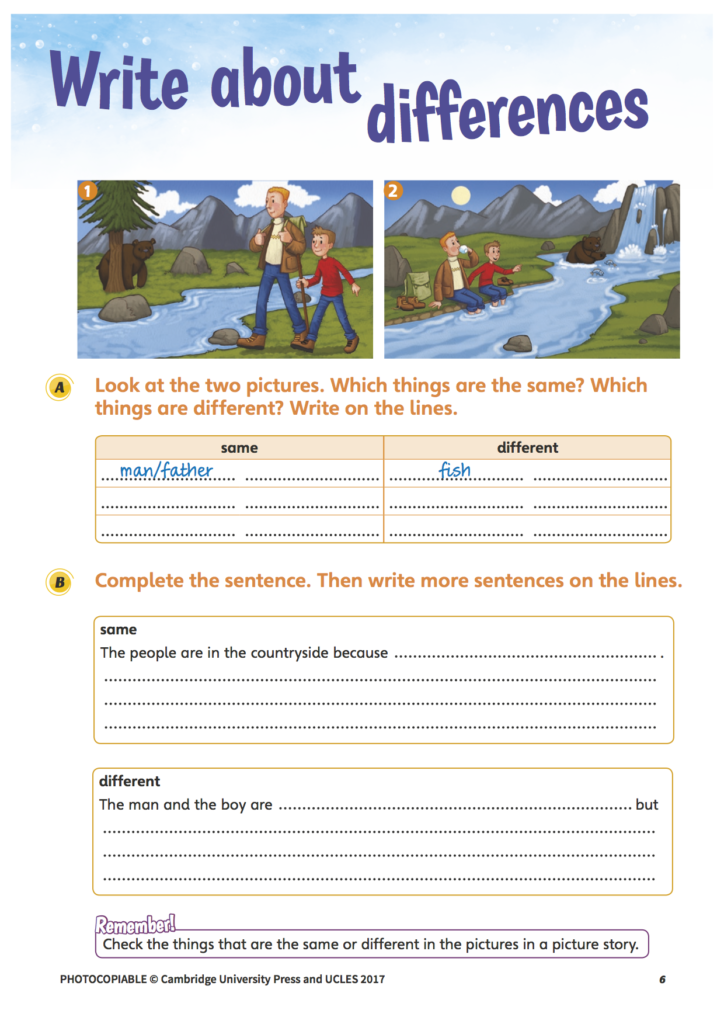 You can see that there are two pictures.  They look the same, but some things are different.  Perfect practice for A2 Flyers Speaking Part 1!

1.  Ask learners to look at the pictures and to think about the people, their clothes and what they are doing.  Also about the things around them.

3.  Practise A2 Flyers Speaking Part 1 by saying sentences about the first picture.  Learners tell you how their picture is different, using the same/similar structures as your sentences.

Here are two pictures.  My picture is nearly the same as your picture, but some things are different.

In my picture, there’s a bear behind a tree.

In my picture, a man and a boy are walking beside a river.

In my picture, there are clouds in the sky, but I can’t see the sun.

In my picture, I can’t see a waterfall.

In my picture, there’s a large rock in the river.

In my picture, I can’t see any fish in the river.

In my picture, the man’s rucksack is on his back.

The people are in the countryside because we can’t see any buildings.  There’s a river with quite a lot of water.  There are rocks both in and next to the river. There are clouds in the sky, but it isn’t raining.  There are two people in both pictures.

Looking for the things that are different in the pictures in a picture story can help learners with the story telling tasks in the A2 Flyers Speaking and Reading and Writing tests.  (And also in the A2 Key writing task.)